Michael Baer comes from a very prominent family of Swiss bankers, and one of his passions in life is running: he has done more than 50 marathons in the last 10 years and belongs to the prominent Grand Slam Club. We talk to Mr. Baer about finding time in one’s schedule for a hobby that requires real dedication and about becoming a running guide for blind people.

– How did you get into running?

– It started by chance. I just signed up for a race and I went along. It basically meant nothing. It was supposed to be a short run, but I ended up doing a marathon. Then I realized how much fun it could be and how interesting it is to overcome what might be considered something impossible to achieve, and how your mind can override signals to the body. Then I did more runs, including the difficult ones, ultramarathons as well as high altitude runs. The fascinating thing is really the battle with yourself, your body, your mind and your concentration, and trying to get to a goal that is further away than what you think is possible. And then I trained to be a guide for blind runners. I started running with one person, Hans Peter, and we used to do 10K, and then I asked him if he wanted to run a marathon with me. He said, “No way, I cannot concentrate that long”. Then over time we ran more, then did one marathon, and another… It’s amazing how you can do things that are not really obvious.

– When you run with blind people, what does the training look like?

– It’s about building up your miles and getting fit at the same time. The person I train with, Hans Peter, has two or three other guides. I typically train with him once a week and one of my colleagues runs with him during the week also. We share the same training schedules – hill runs, intervals, long runs. What we train is not just running but also communication. We both have to concentrate, and I have to make sure he does not fall or trip. After a few hours our concentration decreases. For the first hour, we talk and then we get really quiet. He gets very sensitive to my touch – when I pull or push him a little, he reacts. It is something we have developed over the years – to be sensitive to each other’s needs and very aware of the surroundings.

– How did you become aware of the blind running movement?

– When I was running the New York Marathon I saw four or five tandems, which I think were all Korean. I thought this was amazing. When I returned to Switzerland, I found two or three groups that educate guides for blind runners. They also find you a blind running partner to match your speed. I got educated in guiding, and they paired me with the fastest runner. Then we became friends and continued to run together.

– How do you organize your life to manage to have time for everything, including marathons?

– During the week, I need one hour every other day – short but intense training, during which I train intervals, mountains, or sprints for one hour. It is not two- or three-hour long runs – those I do during the weekends. You can always find an hour in the day. Small bites. Sometimes I find myself sitting behind a computer, reading newspapers, not concentrating. I try to work efficiently and use the extra time for running. And when I go for a run I am really out of the office, and nothing disturbs me. When I come back I feel refreshed and full of energy.

– You are a member of the Grand Slam Club, which means you have run on all seven continents, including the North and South Poles. How many marathons have you run, approximately?

– I started exactly ten years ago. I have run three or four per year, sometimes more, so maybe about fifty. I also train half-marathons nearly every weekend or compete in half-marathons, ultramarathons, so I’ve honestly lost count.

– Which ones are your favourite?

– I do not just go for the run, I try to choose destinations that are exciting. The North Pole was an amazing trip. We went to Spitzbergen, spent three days there because the marathon was delayed, then spent another two days at the camp at the North Pole. It was a whole adventure. The run itself was difficult, it was minus forty degrees, but somehow it was not about the run. The Atacama Desert was another amazing experience. You run at an altitude of 4,500 meters, where the air is very thin! However, we were there for a whole week, and we saw the Andes, the El Tatio geysers, the volcanoes. It was unbelievable. I did an ultramarathon in Durban, the Comrades Marathon, which is 89 kilometers. It was a tough run, it hurt a bit, but you get another great trip out of it. From there we also went to Mozambique, to the beach. The Boston marathon is fantastic because of the atmosphere. I ran Boston with Hans Peter and that was something else: they really celebrate the handicapped athletes.

– Boston is probably challenging for blind runners as it is very crowded.

– Americans have a lot of discipline. In Boston they have a VIP bus for the handicapped runners with a dedicated tent close to the start. When we went to the start, they parted the crowds so that we could go through without anyone being touched or pushed. We started at the very end of a fast group of runners, and the next group was twenty minutes behind us, so we had a lot of space. In addition, in the US nobody would ever cut you off or push you. Everyone was cheering, other runners would give us a friendly pat on the back while passing: “You’re awesome, you’re a hero!”

– How can a person willing to run with blind people find a group that would help them to get the necessary skills?

– You would have to look in your region. There is one larger organization in the US, but in Europe it is very local. Some running clubs for blind people also educate guides. You have to keep in mind that it takes time to get used to work with handicapped people. It’s not something that comes naturally, it’s a skill. I would urge people to overcome their inner barriers – for running in general and for running with handicapped people. It’s good to go out there and see what you’re capable of doing, to overcome barriers: in life, in business, in running. I think people are capable of much more than they think. I have had many discussions with younger people, and many of them think things are too difficult for them – at work or in sports. I have coached maybe twenty people to run marathons and half-marathons. They always doubt themselves: “Do you think I could do a half-marathon?” And I always say: “Yes, of course. you’ll be able to do it in two to three months, you just have to train three times a week”. I have trained several women, and often their husbands would say that their wives would not succeed. That is, of course, the greatest challenge. Ok, you won’t win first place but you’ll finish, I can guarantee that. I have many friends who started running marathons, and they are so happy that they have proved to themselves they can do something that they didn’t think was possible.

– Does overcoming those barriers help you in everyday life?

– Many things in life are like a marathon. You take tiny little bits and you add them together over time. I think a lot of people fail when starting a big project because they see the goal, and they want to get there as quickly as possible. They want to take a shortcut, but normally there isn’t one. Many things in life – marriage, building a house, relationships, work, – are a marathon. Something you do them bit by bit, with small, intermediate victories, not as one big thing.

– You started your own bank only two years ago. Was there a moment of overcoming issues, when you decided to go out on your own?

– This banking project took us a long time to launch – it was two and a half years just to get a banking license. There were many obstacles. Sometimes you have to sit down and say to yourself: ok, we are taking small bites, going step by step, and eventually we’ll get there.

– I understand that your company’s concept is different from a traditional Swiss bank: it’s not just wealth management but more like entrepreneurship.

– We call it a ‘merchant bank’, an oldfashioned expression. Banking was not always about wealth management. It was about supporting entrepreneurs, their family and their business. When I was learning the trade, a banker was familiar with all three parts of his client’s life. It was not just about going after a wealthy client’s money; it was about helping with all parts of his or her life. That is what we have recreated. We are here to solve problems – company problems, or advising the family. We offer our clients everything we know about banking.

– So, like you said, it’s an old model, but at the same time it’s more modern, more flexible, more creative.

– It is indeed a very creative job. There is the part where you just sit down with someone, take a blank piece of paper, and look at his or her problems together from many different angles. Then you come up with solutions that help your client achieve his goals. 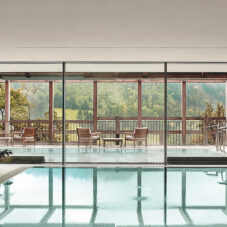 “We have the best of both worlds”

SHM talks to Martin Nydegger, the CEO of Switzerland Tourism, about the organization’s plans to promote medical tourism
Expert opinion > 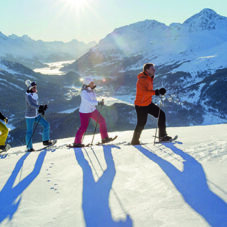 Swiss health as a high-quality brand

What does the notion of “Swiss Health” stand for?
News