In addition to its healthcare traditions, its medical center and its mineral waters, the Grand Resort Bad Ragaz is now famous for another restaurant – Igniv, opened by renowned Swiss chef Andreas Caminada (he has three Michelin starts and 19 Gault Millau points on his CV). He believes that food should not only be tasty and useful, but that an atmosphere of healthy communication should also accompany it.

Talking about the restaurant’s underlying concept, they often use the word «sharing». «We want to sit people at one table, give them an opportunity to experience a common culinary adventure, try new combinations, and compose their own dishes from different components. In other words, we still adhere to the principles of «haute cuisine» in culinary art; however, we deliver it in a democratic environment», says Andreas Caminada. The master chef is as original as ever – his unusual combinations of products and flavors make people experience new gastronomic sensations. You try a dish and you want to discuss this experience with your family.

«Let me draw your attention to how people go to restaurants nowadays: restaurants bring a plate to each guest and everyone is enjoying the experience, but separately. «Yes, yours looks delicious…» However, we put several dishes on the table and guests can share with each other. «Go on, try this one, it is tasty with that…» reasons Peter Tschirky, «We are coming back to the time when the family gathered unfailingly once a day at the common table and everybody shared their thoughts. I remember this atmosphere from my childhood». Grand Resort Bad Ragaz often accommodates large families – parents, grandparents and grandchildren. The idea of the restaurant is appealing to both the younger generation and the older one, and, according to Peter Tschirky, it is creating a new atmosphere at the Grand Resort Bad Ragaz.

The restaurant has its name, Igniv, for a reason. The word is translated from Rhaeto-Romance as a «nest.» As a result, even the name conveys the idea of family values: the family unites in a cozy place, where they feel protected and warmed by shared emotions. Andreas Caminada says that he also associates a nest with a bird that maintains warmth and brings food. Responding to the question of what sharing food with people means to him, Andreas said that it was a different level of communication – a more intimate one. «These days, we rarely devote our time and attention to each other, and we want to share emotions, including the pleasure of a tasty meal».

The interior of the restaurant has been created by the famous Spanish designer Patricia Urguiola. It has a modern design, which, however, conveys a spirit of traditions. Silvio Germann, the young but already famous chef, will implement the culinary ideas of Andreas Caminada. Andreas says that he is happy that the team shares his tastes and his attitude to work. 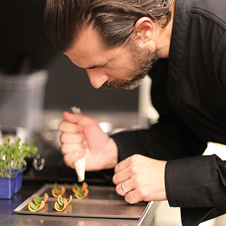 Healthy living and healthy eating are two notions that go hand in hand. This does not mean that you should avoid fried and greasy foods
Cuisine > 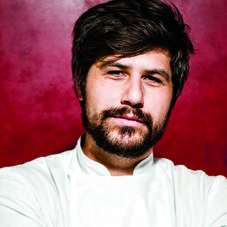 To stand by the roots

Where does high cuisine originate from, and how is it related to Michelin stars?
News