We are often unsatisfied with the march of time. Sometimes we want time to pass quickly and sometimes for it to freeze, so that we might enjoy the moment for a little longer. We are becoming more mobile, we are making more trips and every year the transport system in Switzerland is improving, thus enabling us to save more time during our journeys. Residents of this country know how to use their time. You just have to know the Swiss Travel System (STS) to convince yourself.

In June 2016, a new transport artery appeared in the heart of Europe: the longest and deepest railway tunnel in the world opened in Switzerland. The Gotthard Base Tunnel significantly reduced the distance between European cities. Now it enables passengers to travel at high speed, not only from the German part of the country to the Italian part, but from one European state to another. The fact that it takes only 20 minutes to cross the Alps fires the imagination…

Let’s assume that you are in a hurry for a meeting with business partners, or for a conference. You had a working conference in Zurich in the morning, and only a couple of hours later you are already in Milan, having managed to look through the documents and have a coffee in the train taking you to your destination at a speed of 250 km/h. After the commissioning of the tunnel under the St Gotthard Pass, and especially after the opening of the Ceneri tunnel in 2020, the economic capital city of Switzerland and the main city of the Italian region of Lombardy will be much closer to each other: if the journey from Zurich to Milan currently takes 4 hours and 3 minutes, in 2020 it will take only 2 hours and 50 minutes/

EVERYTHING FOR THE SAKE OF NATURE

Work on the Gotthard Tunnel has taken more than 10 years, and during this time the project, which began with a 15 km section of railway, has grown into a masterpiece of transport construction.

The construction project, which has cost almost EUR 12 billion, was paid for by the Swiss taxpayer as a large-scale infrastructure project aimed at increasing the efficiency of cargo and passenger transportation. The main goal is to transfer cargo traffic from the roads to the railway, and thus to protect the Alpine environment from combustion engine gases. Notably, it affects not only Swiss cargo, but European transit traffic as well.

Over 2,600 specialists from 10 countries were engaged in the construction process. It took three years to lay the rails. Three teams of 125 people worked day and night (without days off) and over the weekends. It took more than four million cubic meters of concrete, 290 km of rail and 380,000 cross-sleepers, as well as 16,000 tons of reinforcement steel. Nearly 56% of almost the whole 152 kms of the St Gotthard Tunnel had to be dug with the help of drilling equipment. 44% of the progress was ensured by blasting teams. 28.2 million tons of subsurface rock and breakstone were extracted in total. Much of the mining output was used in concrete production to reinforce the walls of the tunnel. The remainder was used to create islands for nesting birds and swimming in Lake Lucerne.

THE SAFEST IN THE WORLD

Railway traffic in the tunnel will be provided by two parallel viaducts, thus any frontal collisions are absolutely impossible. Branch tunnels every 325 meters are connected with cross galleries enabling the operators to evacuate passengers quickly in the event of an emergency. Swiss Railways, the national transport concern, guarantees that the basic railway tunnel will be one of the safest in the world and will be able to provide the highest possible level of safety, in the fields of both passenger and cargo transportation.

The most complex computer systems will be used to plan the railway timetable, in order to organize the traffic of railroad trains in the optimum way and to respond in due time to any possible emergency situation. Trains which do not comply with the strictest safety norms will simply not be allowed to use the tunnel. In order to neutralize or repair damaged trains or rail wagons, two technical railroad terminals have been built: one in the area of Sedrun city and the second in the area of Faido city.

NEW TRAINS FOR A NEW TUNNEL

EC 250 trains will appear on the St Gotthard line between Zurich and Milan in 2019. The Giruno high speed train, which is 400 meters long, is designed with 806 seats. The carriages are equipped with a low step for passengers in wheelchairs. The trains are equipped with 3G/4G signal amplifiers providing high quality communications during the journey. There is also a plug socket near every seat and the carriages have spacious compartments for luggage and separate WCs for men and women. A total of 29 wagons are planned to be purchased. 26 will be named after Swiss cantons and the rest after the tunnels – St Gotthard, Simplon, and Ceneri.

No matter why you take the train – for business, medical tests, the education of your child or just for traveling – your journey will fly past. You can work on this train or just take a rest in the comfortable seats while observing the constantly changing view out of the window. Socialise over lunch with a glass of wine in the restaurant or drink a cup of coffee with a croissant reading a book… if, for example, a passenger is recuperating from serious surgery or in the process of rehabilitation and has to travel to another European city and a plane flight is too heavy-duty, the train is a perfect solution. The journey will pass without any pressure differences and with no take-off or landing, and you can enjoy your journey.

THE NEW AND THE OLD

The current railway connection via Gotthard remains. The alpine branch railway with its multiple bridges, tunnels and junctions will still operate. Passengers will be able to choose whether to travel by the old railway route or by the new Gotthard Base Tunnel.

Moreover, by using the timetable at www.sbb.ch it is easy to select any route by indicating all your transfers. If you purchase a Swiss Travel Pass, you can forget about worrying about the tickets because you can use any type of transport in Switzerland. You can’t go wrong with Swiss trains. They will deliver you to your destination point with minute- level accuracy.

The punctilious Swiss have already calculated how much time the commissioning of the Gotthard Base Tunnel will save: 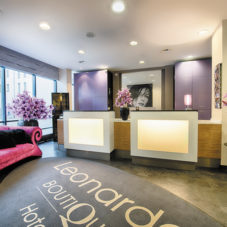 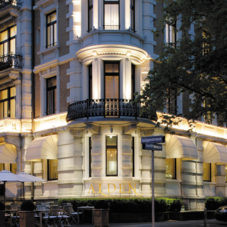 In the smallest five-star hotel in Zurich, Alden Splügenschloss, you have the sense that you are visiting good friends
Travel > 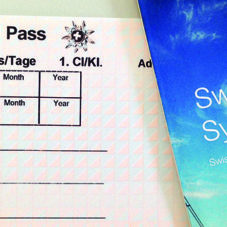 The best offers for guests
News