Almost one in five people over the age of 65 has problems with their blood vessels, which can cause severe complications. More than 40 years ago in the Clinic for angiology of the University Hospital of Zurich, scientists developed a unique method to restore blood flow in occluded arteries (balloon angioplasty), which has been used successfully throughout the world.

Today, the doctors at the clinic are continuing their pioneering work, using the most modern methods to diagnose and treat vascular problems. This was the topic of the interview between Swiss Health magazine and the Head of the Clinic, Professor Beatrice Amann-Vesti, one of the best- known experts in the field of angiology in Switzerland and Europe.

– It is known that the arteries, veins and lymph vessels perform vital functions in our body, therefore functional disorders in the vascular system can have serious consequences. In your clinic you cure disorders of any and all vascular vessels. Can you tell us about the most common ones?

-The majority of our patients suffer from occlusive peripheral arterial disease, which is characterized by the calcification of blood vessels, resulting in reduced blood supply to the affected limb or organ. Arterial problems of the legs cause severe pain in walking (also called claudication) or even loss of tissue due to lack of blood (gangrene), leading to amputation. This severe complication can often be avoided if the patient presents themselves to a specialist early enough and revascularization of the artery can be performed.

– Surely age is not the only risk factor?

Vascular problems may start long before retirement age, especially for people at risk, such as smokers (there is even a term, “smoker’s legs” – doctors use it to refer to limbs with severely damaged, clogged blood vessels), people with diabetes, high blood pressure or high cholesterol levels.

– What diagnostic tests for this disease are available in your clinic?

–Almost all blood vessels in the body can be examined by duplex ultrasound and the localization of the occlusion but also the amount of calcification of the vessel wall can be determined. Other non-invasive techniques like measurement of oxygen in the tissue are of course also available. the smallest vessels in the body, the capillaries, can be visualized with a special microscope. Other techniques like Computer Tomography (CT) and Magnet Resonance Angiography (MRI) are of course also available at our hospital.

– Pain in the legs – is this the main symptom which indicates problems with blood vessels?

– Yes, the most common complaint of our patients is pain in the calves and thighs when walking. We call it “window shopper disease”, since because of the severe pain caused by shortage of blood in the extremities, people are forced to stop on the street and others often think that they are just looking at something in the shop window. Another important indicator is non-healing wounds, leg ulcers. These may suggest that the blood supply to the skin is insufficient. If the patient ignores these symptoms, tissue necrosis can develop.

– What diagnostic methods do you use in your work today?

– Of course, the primary method is ultrasound, so in our clinic we perform over ten thousand Duplex ultrasounds annually. There are other very specific methods for studying the morphology and function of the blood vessels. We are, for example, the only clinic in Switzerland which performs microlymphography. Lymph vessels of the skin, not normally visible under a microscope, are injected with fluorescent dye, allowing even the smallest vessels to be seen. In total, we provide about twelve thousand consultations per year.

– That is a very impressive number! However, in addition to the most modern diagnostics here at the University Hospital of Zurich, you were the first to develop and to use a unique method still used today for the treatment of vascular diseases worldwide. Please tell us about it!

– This is a technique to open occluded arteries using a balloon catheter. This technique was developed by Dr. Andreas Gruntzig more than 40 years ago here at the University Hospital. He constructed the balloon together with an engineer. The first intervention with this ballon technique worldwide was performed in our hospital in 1974 on a patient suffering from claudication because of an occlusion of his leg artery. Three years later, Andreas Gruntzig was able to use the same balloon technique to restore blood flow in an artery of the heart.

Since then, the technical improvements have been enormous. We now have balloons and stents covered with drugs to improve the result but also many different catheters and techniques for opening occluded arteries.

In addition, our clinic holds weekly interdisciplinary conferences on vascular therapy, where doctors discuss patients with complex diseases and work out the optimal therapy for them. We work with vascular surgeons and with the Balgrist clinic, for example, in the treatment of diabetic foot syndrome. For patients with chronic non-healing wounds, which may indicate vascular disease, the clinic organizes interdisciplinary outpatient appointments in a unique coordination center where not only angiologists, but also dermatologists, vascular and plastic surgeons, and orthopedists jointly develop the treatment concepts.

– What methods of prevention are the most effective when it comes to cardiovascular disease?

– The most important risk factors for cardiovascular diseases are smoking, high blood pressure, high cholesterol and diabetes. One of the most important things is certainly regular physical exercise. A 30-minute brisk daily walk will not only help to reduce body weight, but will also improve blood sugar and lower blood pressure. If the patient already suffers from “intermittent claudication” (caused by narrowed blood vessels), we recommend an outpatient program of regular exercise combined with walking, which allows us to mitigate against the symptoms and helps to build up new blood vessels. Such a program was developed in our clinic by doctors together with physiotherapists and it has already established itself as a very effective therapy.

Another very common disease is varicose veins and venous thrombosis. Today we have the ability to cure varicose veins using catheters. A very thin catheter is introduced into the varicose vein, either with a laser beam or a radiofrequency, and the vein can be occluded from the inside, but very new “clue-like” substances are also used to occlude varicose veins. Phlebectomy or “stripping”, a surgical method needed to remove the vein, is only necessary in very rare cases.

The most dangerous venous disease is deep venous thrombosis because it can be complicated by a pulmonary embolism, a life- threatening condition. Therefore, it is essential to diagnose it early, and begin immediate treatment. Thrombosis is treated with anticoagulant drugs, and in some cases also by using a catheter to remove the blood clot.

– We know that you have received a grant from the Union of Swiss Societies for Vascular Medicine (USGG) for research in the field of vascular malformations. What is your most important goal today?

– Educating young doctors is one of our most important tasks, and one which personally brings me great joy every day. I will say it straight: to have the opportunity to work in such a fantastic clinic together with such wonderful people is a great privilege!

Professor Dr. med. She studied medicine and received her diploma from the University of Zurich. In 1996, she became a member of the Federation of Swiss Doctors (FMH) in the field of internal medicine.

In 1997-2000, she was employed as a researcher at the Department of Vascular Surgery at the University of Washington, in the Laboratory of Vascular Biology (Medical Center, Seattle, USA). On her return to Switzerland, Beatrice Amann- Vesti was initially appointed senior doctor at the Clinic of Angiology at the University Hospital of Zurich. Since January 2006, Beatrice Amann-Vesti has been the head of interventional and clinical Angiology of the University Hospital. From 2013 to 2015, she was President of the Swiss Society of Angiology (SGA). Professor Amann-Vesti is a member of the board of the Union of Swiss Societies for Vascular Medicine (USGG), and the governing board of the European Society of Vascular Medicine (ESVM). 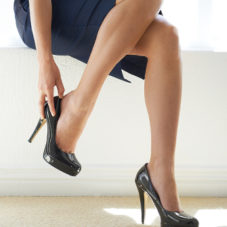 The truth is in the legs

Varicose disease can be – and has to be – treated. Today, there are quick and painless treatment methods available. Swiss doctors know how to rid us of varicose veins for a long time, if not forever
News