This story begins with the struggle for the life of a sick child – Misha Mahov from Krasnodar. After several operations, numerous courses of treatment and an endless search for other therapies, it became clear to his parents that the only chance for Misha would be a bone marrow transplant in a Swiss clinic… Thanks to the work of some passionate people, the child was saved. His mother, Yuliya Bozhok, founded the charity Hoffnung Schenken (“Give Hope”), which helps sick children to get to the Children’s University Hospital of Zurich and cure their disease.

This disease is a genetic accident, one which may not manifest itself for generations but then suddenly emerge, targeting one particular child. For the parents, a diagnosis of immunodeficiency sounds like a verdict. The newly born baby’s blood cells do not work properly, and the body is vulnerable to bacterial and fungal infections. This means that such simple childish joys as football, bathing in a lake or going to the circus represent mortal dangers to the child, but the doctors at the Children’s University Hospital in Zurich have proved that the disease is completely curable. In 2011, Yuliya Bozhok was pregnant, and already knew for sure that it would be a boy named Mikhail. Nobody suspected how many trials would come his way. After all, it is the boys who suffer from the chronic granulomatous disease (CGD), transmitted through the maternal line. The eldest son was born healthy, but Misha had a chromosome defect …

– Upon hearing the doctor say, “Your child is sick with primary immunodeficiency”, I slid down the hospital wall, losing consciousness from the shock. The doctor hurried to explain that this is not acquired immunodeficiency syndrome (AIDS), but a genetic condition, but this did not make it better. By the time Misha was only a month old, he had already had two operations under general anesthetic. Terrible news awaited us: according to the results of the MRI, he had another issue – Spina Bifida (fixed spinal cord). This disease occurs in only one of 300,000 children. [Unique operations upon children with such diagnoses are done by Professor Martin Moyli from the Children’s University Hospital of Zurich, who SHM talked to in our 9th issue – Ed]. They say that lightning does not strike twice, but it did for us…

In Russia, they did not rush into operating on Misha’s back, and this saved his life.

– How did you end up in a children’s hospital in Zurich?

– Misha’s Guardian Angel led us there. Thanks to him, we met Dina Vladimirovna Lesik, whom we are eternally grateful to for her timely diagnosis and competence, which led to the salvation of my son. But the situation was complicated. Misha was prescribed serious antibacterial and antifungal therapy. The situation was exacerbated when he was given an anti-tuberculosis vaccine while discharged from the hospital. Because of complications, he had to take toxic drugs for a long time. He developed toxic hepatitis, and this also had to be treated! These tortures seemed endless. We understood that immunology as a science in Russia is still in its infancy, and our doctors have practically no experience in bone marrow transplantation for patients like Misha. Therefore, we were looking for information on foreign sources and found an article by the famous geneticist Manuel Grese. I wrote to him and he answered. On his recommendation, we went to the children’s hospital in Zurich, where we consulted Professor Reinhard Seger. After the necessary tests, he told us about the precautions, corrected the drug therapy, and, most importantly, instilled in us the confidence and the belief that this disease is absolutely curable! In the clinic, this disease has been studied since the 1940s and they have achieved great results. I understand that the strength of Swiss doctors is largely determined by the continuity in their medical system.

– But you were to have a bone marrow transplantation?

– Yes, as this is the only way to defeat CGD. The joy we got from the fact that our child had a chance was replaced by despair: the clinic billed us 647,709 Swiss francs. But we did not have the right to give up, so we began to seek money for treatment. It was very hard. People did not believe that, looking at the seemingly cheerful Misha, he was on the verge of death. And we could not explain that he takes strong drugs every day… People were embarrassed by this huge bill for the treatment, and we were accused of all manner of sins. And we, swallowing back tears, persisted with our mission. Later, having met with Professor Typhoon Gyungor, we told him about everything that had happened. And he helped to reduce the amount – a victory! Further charity funds were found: the bulk was paid by “Rusfond”, “the AiF dobroe serdtse” also helped, and so did the German Hertz fund. And, of course, good-souled individuals helped – our leaflets for help spread around the world.

– Then there was the idea of creating the Swiss the fund “Hoffnung Schenken fur Misha” (“Give Hope to Misha”)?

– Yes, it allowed us to avoid losses when transferring money between countries. Now that Misha is healthy, we have changed the name to “Give Hope” and we help other children with the same diagnosis to go to the clinic for treatment.

Misha’s history is unique in every way. He was the first Russian child to have a successful bone marrow transplant in a children’s hospital in Zurich, and after him Russian patients were treated at the bone marrow transplantation department, the work of which is supervised by a great professional, Dr. Matthias Hauri-Hol. Our acquaintance with the doctor started at the most difficult moment: Misha was in an isolation box. He no longer had his cells, and the new ones did not appear. He had a temperature and was very weak. Dr. Hauri-Hol is a Heaven-sent doctor and a person with a good heart! I am sincerely grateful to him and all the staff of the department of bone marrow transplantation for saving the life of Mikhail.

Now my life is closely connected with charity. Not so long ago, in Russia, I created the charity foundation “The Power of Hope” to help families, since it is very important not to be alone with such difficulties: organizational, moral and material. And I’m happy that, with our help and support, the first three families closed their accounts for BMT in 2017. Following the transplants in the children’s hospital in Zurich, the children will have a healthy and happy childhood.

If you want to help children with serious diagnosis 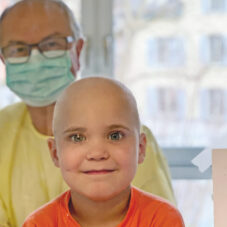 It’s an immense responsibility to treat children, especially when the child’s life is at stake
News