While resting in a beautiful place, in the Alpine mountains and their curative thermal springs, springs ideally suited to washing away the sign of weariness from the face, we hope for an internal and external transformation. But the traces of past years will not be so easily got rid of without professional attention. This principle is especially important at Bad-Ragaz, where one can relax and at the same time get rid of defects that ages us: birthmarks, pigment spots, papillomas, spider naevuses. The leading specialist at the medical center Grand Resort Bad Ragaz, dermatologist-allergist Brigitte Bollinger, will take care of this…

– Dr. Bollinger, you use the most modern laser equipment. Even in Switzerland, there are only a few such devices. Is it possible to use these devices to deal with skin defects during a short stay – of, let’s say, a few days or weeks?

– Yes, sure. A modern laser makes it possible to remove any birthmarks, spots, excessive pigmentation, and other defects that impair the appearance of the skin. But before that, a sense of professional duty obliges me to study the skin carefully. In general, before any procedure, it is necessary to carry out diagnostics. But the study of the samples in the laboratory and the treatment itself do not take long, and can be combined with resting.

– Why examine the birthmarks so carefully?

– There are those which cannot be treated by laser, as this might promote the development of cancer. During the procedure skin damage occurs and cell growth is stimulated, so malignant cells, if present, also grow. Therefore, first of all we carefully study and investigate suspicious birthmarks. And the actions that we will take in the future will depend on the results.

– Are any marks left?

– Much depends on the quality of the equipment and professionalism of the doctor. Modern lasers, in skilled hands, are able to remove almost all skin imperfections, leaving barely visible marks or none at all. The medical center in Bad Ragaz Resort has the appropriate equipment for working with any type of neoplasm with practically no consequences.

– Is it always necessary to worry about papillomas? What happens if one just… ignores them?

– Papillomas are formed due to various factors, including reduced immunity, vitamin deficiency, dysbiosis, and bodily contact with virus carriers. But since this skin neoplasm is of a viral nature, if it is not cured it spreads. In addition, the more papillomas, the worse the resistance of the skin, and therefore they begin to grow more actively.

– Dark circles and bags under the eyes also make the face look older. Is it possible to deal with this problem with the help of a laser procedure? Is it possible to get the same effect as after blepharoplastics?

– It depends on what has caused the appearance of the dark circles. Sometimes they are caused by a lack of sleep or diseases of the internal organs. Then, of course, one first needs to deal with the root cause. But often this effect is a consequence of the fact that the skin becomes thinner with age and loses its elasticity, and then vessels also appear under the surface. This can be aided by surgery, plasma lifting, lasers, or a combination of all three methods to achieve the optimal result. So, again, the main thing is the correct diagnosis and the professionalism of the doctor.

– Tattoos are very popular these days. But tastes change and upon getting older, people sometimes regret that they did it. Is it possible to correct such «mistakes of youth»?

– Yes, the fashion for tattoos is spreading more and more but many people really want to get rid of them – especially when their ‘artwork’ does not suit their age. And, of course, the cosmetic industry is working to remove them without any marks. The latest models of lasers (Picosure) can cope even with colored tattoos. Moreover, this does not require any great effort – one can come to us on vacation, relax, and at the same time take care of this problem.

– Perhaps the same can be said about scars? If they add character to a man, for instance (as a folk wisdom says), it is surely not so for a woman. What can a laser do in this case?

– The scar can be masked. The trick is to make it as smooth as possible, almost invisible, and for the most part this is possible.

Why do scars appear? Any skin damage triggers a complex chain of processes, leading to the elimination of the defect. In an overwhelming majority of instances, after regeneration the skin cover is completely restored. The surface of the skin becomes smooth and even. But a scar or mark appears if the cells in the damaged area lose more than seventy percent of their original elasticity. And if the body reacts to the problem too strongly, this leads to disruption in the synthesis and distribution of collagen. As a result, the wound gets overgrown with nodular tissue.

The laser beam quickly heats the target tissues, destroying them. As for the neighboring ones, they do not have time to break due to the speed of the impact. The doctor removes the collagen nodules with the laser, making the scar tissue soft and supple and freeing up space for normal skin regeneration. Particularly good results can be achieved if the scar is not more than one year old.

– For many people, the issue of spider naevuses is one we need to focus upon. What can be done if they have appeared on the face or legs?

– Spider naevuses are small, pathologically dilated vessels that have increased in diameter so that they are visible to the naked eye. Unfortunately, the expansion is persistent and will not pass if left to itself. The causes of the onset are mostly genetic. In addition, the situation is complicated by factors such as pregnancy, chronic diseases, an excessive passion for saunas, or alcohol abuse. They are resistant to laser treatment, but an experienced doctor can easily cope with them. In addition, we give recommendations on their prevention.

– What other skin defects can someone who decides to spend his vacation in Bad Ragaz take care of?

– We successfully work with acne. This is well handled by RF needling (fractional radiolifting), since the process occurs in the deep layers of the skin. For most patients, after treatment the inflammation passes.

And of course, the laser eliminates wrinkles. The effect can be compared with a surgical face lift. The technique allows us to work simultaneously on the surface of the skin and on its deep layers. The doctor can get, for example, to the deepest tissues of the nasolabial fold, moreover, from the oral cavity. We act as if in several dimensions: through the surface of the mucosa, deeply penetrating the flesh from inside and using a conventional fractional laser therapy.

– Are there any contraindications for laser procedures?

– Very sensitive skin, pregnancy, contraindications to laser exposure. If the skin is strongly pigmented, special attention is paid to it. In addition, we always find out what medicines the patient is using, as some drugs may increase sensitivity.

Why is FRAC3 ® better than a two-dimensional treatment?

As a fractional technique, FRAC3. has a distinct advantage over conventional two-dimensional fractional treatments in that not all of the targeted skin tissue is uniformly thermally affected or removed. FRAC3. is non-ablative and leaves the maximum of healthy tissue untouched, thus promoting rapid healing and minimizing patient downtime. The secret to safe, effective and minimally invasive transdermal treatments lies in Nd:YAG’s ultrashort pulsewidth range. Its pulses have been shown to selectively heat small skin imperfections and inhomogeneities of a <50 μm size range throughout the skin tissue, effectively forming FRAC3.’s distinct three-dimensional pattern of fractional islands of thermally affected skin. Thermal skin images and ultra-structural analysis show a decrease in overall collagen fiber diameter in the papillary dermis, which promotes new collagen formation, and improvements in the overall skin quality.

MD, doctor of the Swiss Medical Association – Specialist of Department for Dermatology and Plastic Surgery, Grand Resort Bad Ragaz Medical Health Center. She graduated from the Medical Faculty of the University of Münster in Münster, Westphalia (University of Münster) and received a medical practice license in 1992. In 1996 she became a specialist in the field of Dermatology and Venereology. She received additional qualifications in allergology (1997) and phlebology (1998). From 1998 to 2014 she worked at the University Hospital of Münster as a dermatologist specializing in laser therapy and outpatient operations. In 2015–2016 she was in private practice in the field of dermatological surgery at Vorberg Beauty Clinics in Münster. 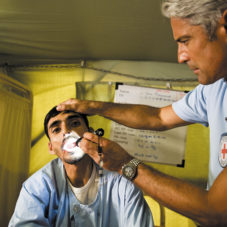