The number of cancer patients is increasing each year, and breast cancer has a particularly high place on the list. Doctors maintain that almost every woman is at risk, as the disease is partially hereditary. Most families have somebody who has suffered from it; a mother, a grandmother, or a distant relative. The closer the relative, the higher the risk of developing the disease.

Professor Daniel Fink, President of the Swiss Association of Gynecological Oncology (AGO) and the Head of the Department of Gynecology at University Hospital Zurich, is certain that if you have a medical examination in time you will experience only minimal problems, and save yourself a lot of trouble in future.

– Professor Fink, specialists in genetics are currently concerned about the influence of the «Jolie effect» on society. Scientists warn that mutations in the BRCA1 and BRCA2 genes do not signify a risk of a malignant tumor occurring and are not a reason for surgical intervention…

– Angelina Jolie had a mastectomy and replaced her breasts with implants, and then she also had an oophorectomy, which removed her ovaries. But she had a good reason to do that: all the women in her family, including her sister, mother and aunt, are prone to cancer. Besides, she had the BRCA mutation in her genes, which increased the probability of cancer, and sooner or later Jolie would have become ill if the situation had been allowed to continue.

– Many women who find out that they have dangerous mutations go to surgical departments at clinics to have mastectomies. How justified is this?

– Each case is individual. No hasty conclusions should be drawn without precise tests, investigations, anamnesis and personal meetings. We recommend that women who wish to have a «preventative» mastectomy carefully examine all the consequences and risks and consult qualified doctors.

– Can we say with confidence that this kind of prevention reduces the risk of cancer?

– Yes, of course. If a woman wants to be sure of staying healthy, then a mastectomy may be a good option. But this is a very complicated issue. You need good reason to recommend this kind of operation, and you need to talk to the patient about it for a long time, not just once. It is also important to know when to carry out the operation. If there is no issue of family planning, then you can undergo an oophorectomy and a mastectomy.

– Have there been any cases when women refused to have an operation, and it became clear over time that the decision was justified and they did not develop cancer?

– Yes, this can also happen. According to statistics, 20% of women with BRCA mutations will avoid this terrible diagnosis. However, a doctor does not know in advance who is going to fall into that 20%.

– When there is a clear need for a mastectomy, do you tell patient about it yourself or is it the psychologist’s job?

– I do it myself. Often women are accompanied by their husbands. Sometimes it is the man who insists that his wife gets implants, so I believe these joint discussions are very important. Of course it does happen that a psychologist is needed. Such conversations all differ from each other. Some of them get very emotional, which is understandable, as women find it very difficult to make a decision like this. We can meet once, twice or even more times. Sometimes the discussion process lasts for up to two years!

– If a woman agrees to a preventive operation, does it mean that she will never get breast cancer in the future?

– This is true to a great extent.

– It seems that this is a complicated psychological issue.

– Yes, it is very complicated.

– Let’s say that the woman is ready to undergo an operation. How do husbands respond? Do they give support when it comes to making the decision, in your experience?

– If a woman comes to the appointment with her husband, it usually means that he supports her, otherwise she would have come alone. In most cases, the men agree to the operation, arguing that they want their wives to be healthy.

– What are the positive trends that you have observed in the treatment of breast cancer?

– Unfortunately, this disease is becoming more and more frequent, but fortunately fewer and fewer women are dying of it. This is because we can identify breast cancer at an earlier stage than before, through means which include mammography and timely examinations. Complex therapy against breast cancer and a variety of tests has also helped us a lot. We have made significant progress in this field over the past ten years. The forecast is better than it was before. We perform fewer radical surgeries and mainly operate using a more gentle method.

– What is the cause of breast cancer?

– No one knows exactly but normally it is a multifactorial disease. There are risk factors, of course, such as nutrition, which play a certain role. If we consider Europe, cancer occurs much more frequently in Scandinavia than in the south, in Spain, Portugal, Greece or Italy. We also know that the disease is more prevalent in wealthy countries with high living standards than in poor ones, such as in African countries.

– When should a woman have her first examination?

– Between the age of 40 and 50, and then once every two years if there is no hereditary factor. If someone has suffered or is suffering from breast cancer in the family (e.g. mother, grandmother), then a woman should go for her first examination and have a mammogram 10 years earlier than the age at which the relative’s disease was identified. For example, if the mother was 45 years old when she had breast cancer, then you have to go to the doctor as early as 35. If it was a distant relative, then the woman should be examined and have a mammogram every one to two years, and if the relative is close, she should do so every year.

– However, there are arguments amongst specialists that mammography is dangerous because of the risk of exposure.

– Mammography is much less dangerous than the cancer which it helps to fight. Look, there are vaccinations, and thanks to them cancers in certain organs can now be prevented. But this is also in dispute. There will always be arguments for and against this amongst doctors. Obviously, it is mammography that helps detect cancer at an early stage today, which means that it is needed. A woman may be afraid that something may be found during an examination, but there is no danger from mammography itself. In any case, Zurich University Hospital now has very modern equipment which is significantly different from the previous generation of equipment.

– How can you recognize cancer in time?

– If you examine your breast yourself, you may notice a tumor in time, and then you should go to the doctor. Unfortunately, cancer is now occurring at a younger age and there are more and more women under 30 who suffer from it.

– Does the risk of developing cancer increase if you take hormonal medication?

– Today hormone replacement therapy is used in special situations. Previously, if a woman turned 50, she was often immediately prescribed hormones. However, today we no longer give hormones if the patient is without symptoms. It is another thing if she feels depressed or dejected, and understands that these are the symptoms of a lack of hormones and comes to us for help. Sometimes a woman just wants to feel or look younger, because this is the way she wants to live or is important for her work. Some women want to extend menstruation (this usually depends on the culture of the country) and so they choose to go on hormone therapy.

There are different types of hormone replacement therapy we might prescribe which depend on the disease, or on whether or not the patient lacks energy, and so on. But you are quite right: taking hormones generates some risk factors, but this is generally a separate issue.

– If the patient comes to you from abroad, how long will it take to examine her? How much time is needed for an operation?

– The examination can be completed during a single appointment. It does not matter whether the patient was diagnosed with cancer or if she found some changes in her breast. She will need about one hour for a primary consultation and to go to the examinations that are required. After that, everything depends on the results. She may need to come once more, but it depends on the situation.

A typical breast cancer operation lasts an hour and a half, and the patient will need to stay in hospital for two to four days, but we try to make this period as comfortable as possible by alleviating their pain and responding quickly to all requests. The next day, the patient can go for a walk. It is desirable to spend a few days in a hotel after being discharged from the clinic rather than flying home immediately.

– Do people have to come for a later examination after the operation?

– Patients from abroad fall into two categories; some women need to keep in touch with the doctor and so they visit us every 3–6 months, while others return only several years later.

Doctor of medical science, is a world-class expert in the field of oncological women’s diseases. He graduated from the Medical Department of Zurich University in 1990. In 1998, he was awarded the Venia Legendi degree in Obstetrics and Gynecology. In 2004, Professor Fink became the Head of the Department of Gynecology at University Hospital Zurich. He is also President of the Swiss Association for Gynecological Oncology (AGO). 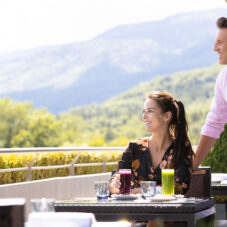 The art of well being

We all are getting sometimes tired or feeling sick. How to recharge the batteries and get back the taste of life? We discussed this with Dr. Michael Gaille, doctor of the Cure Reset program, Clinique Nescens
Rehabilitation >